Today, Solid State Logic (SSL) mixing consoles are iconic studio classics. Not only have they changed the recording industry in the early 80s, but their classic E/G-series consoles as well as the SSL XL9000K are still widely in use by the author of this article and many of the best mixing engineers in the world.

SSL first experimented with a protoype „A-Series“ console in the mid 70s – (two were made). SSL-founder Colin Sanders then developed it into the 4000 B-Series of which a handful were made, one of them recorded Phil Collins „In The Air Tonight“-drums at Townhouse Studios in London.

The early E-Series had the „brown“ 02 EQ on which the filters were at first always switched in, cutting extreme low and high end. They changed that and shortly after replaced the 02 EQ with the classic „black“ 242 EQ where the filters could be switched out completely. 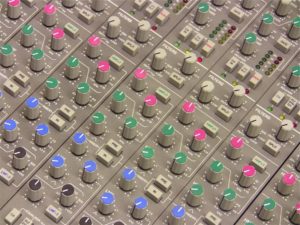 When they started calling it G-Series, it had the 292 G-EQ first, but after a while, on clients demands, most G-Series went back to the 242 EQ from the E-Series or a mix of both.
The Channel Dynamics were kept pretty much the same from E all the way through to the G+, the only difference being different versions of the VCA-Chip. 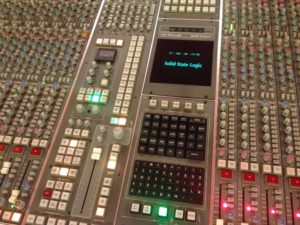 1000s of changes where made between 1979 (first 4000 E) and 2002 (last 4000 G+ delivered which is now located in Atlanta/USA). Parts are pretty much interchangeable. You could fit an early E with some late G-Series cards and vice versa. The different revisions add up to create slightly different flavours. Roughly around 2000 of these consoles were made.

The 9000 J and K-Series (the J was released first in 1995) SSL consoles had a similar user layout, but very different internals. On the 9000, no capacitors are used throughout the audio path. SSL calls this technology “Superanalogue”. Theoretical bandwidth is 5Hz to 500kHz. The circuits are band limited (on purpose) to 10Hz to 80Khz on a 9000J and 10Hz to 120KHz on a 9000K.

The final XL9000K, introduced in 2002, has surfaced mount components in the centre section, compared to the J it has better headroom, bandwidth and a lot of upgrades.
Fewer consoles were sold, compared to the E/G-Series – only 190 SL9000Js and 55 XL9000K. They are mostly custom pieces.

Today’s AWS and Duality-consoles made by SSL are based on the XL9000K while being reduced in many aspects (routing, smaller power supply) and extended in others (DAW control). Today, the different building blocks of classic SSL consoles are also available separately as small modules for SSL’s own “X-Rack” format, and also in 500 Series-format.

The X-Rack modules are either housed in a 19″-case that can hold a total of 8 modules and also provides SSLs famous “total recall”-system, or you can get a smaller case called MYNX that can combine two modules. 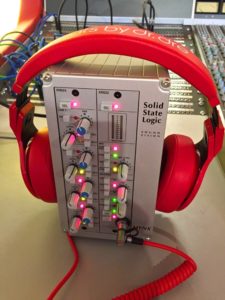 In addition to a 4000 G-Series console, I have build a small portable console with the MYNX combined with an X-Rack Input- and Master-Module. This is the most compact SSL-console ever, based on the super analogue technology of the SSL 9000K XL. I’m also using an X-Rack to be able to combine the characteristics, especially the mix bus summing of different generations of SSL consoles.

The overall design still goes back to the legacy consoles (none of the 4000 – 9000 are in production any more, but still favoured by the world’s top mixing engineers).

Any more questions, let me know… this was just the „short reply“.

[ All About the Vocals – recording, editing, mixing vocals ]
agosto 15, 2019
Productos
Ir a Tienda